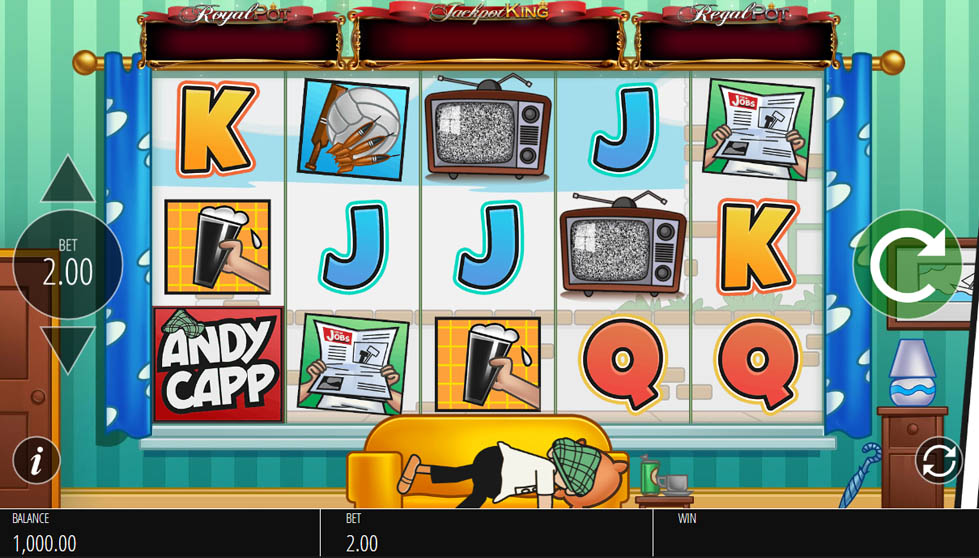 Blueprint Gaming decided to bring an English comic book character to life in a video slot. The Andy Capp gaming machine is all about the anti-hero who is particularly well known in the UK. For sixty years, Andy Capp appeared in the well-known newspaper ‘The Daily Mirror’.

Although the character did not set an excellent example to the youth, it still has its charms. Andy Capp has no job, likes to gamble, mainly sits on the couch and drinks litres of beer. His wife and opposite Flo is only too happy to see this change, but Andy always manages to get out of it. All in all, a great theme to base a slot machine on.

The Andy Capp slot can be played on five reels and three rows, including twenty paylines. The pay lines are fixed and cannot be adjusted. A minimum bet of twenty Eurocents is required per spin, and a maximum of two hundred euros can be placed per spin as well. All participants have the chance to win one of the three progressive jackpots, which can amount to hundreds of thousands of euros just like that. The game is set in the living room of Andy Capp.

This online gaming machine has three mini-features, which can be quite profitable. The first is ‘Andy’s Dream Women’, where the protagonist will dream while he sleeps. The longer he dreams, the more money you can win. Because during that time, the slot will run automatically and for free.

Then there is ‘Colossal Ale’, where Andy will dream about beer. In this case, a mega symbol appears on the reels, drastically increasing the chances of winning. And finally, we have the ‘Andy’s Wild Dream’, where extra Wild symbols appear on the reels, thus creating many more winning combinations