Over the years, many new casino software developers have emerged that focus on the development of quality online casino games. One of these developers goes by the name of Quickspin. This developer is known for always choosing to set the bar particularly high for itself. This is not least evident from their slogan.

On their website it says: “We create the world’s most awesome video slots”. It has to be mentioned that there is certainly something to be said about this. The casino games developed by Quickspin are always of high quality. Would you like to find out more about this developer and the range of casino games it has in store for you? That is possible here on this page!

The origins of Quickspin

For the birth of the casino software developer Quickspin we have to go back in time to the year 2012. At the time, this company was founded by a number of people who already had very considerable experience in the world of casino games development. The company was founded by a number of former employees of the well-known developer NetEnt. They held the opinion that they could actually start conquering the online casino world outside of NetEnt themselves… and they’ve actually been quite successful at it. Quickspin therefore distinguishes itself from other developers by developing high-quality and popular titles. These include titles such as Treasure Island, Goldilocks and, of course, Big Bad Wolf. 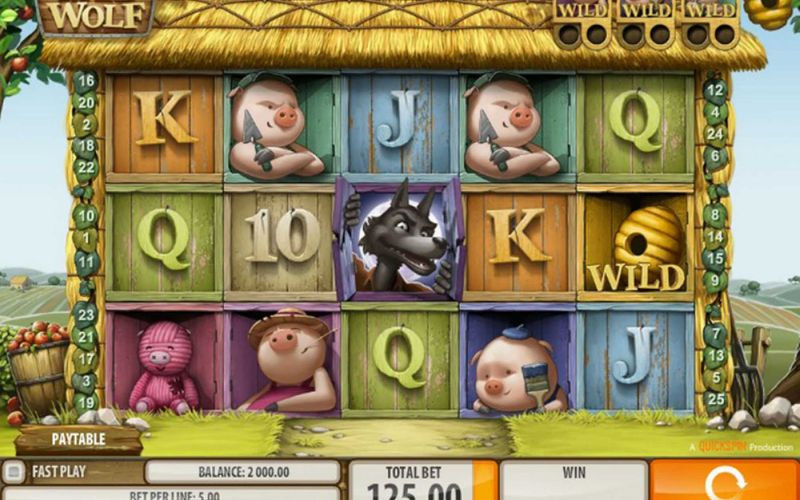 Big Bad Wolf at the heart of Quickspin’s breakthrough

Despite the fact that Quickspin has released many interesting titles, the title ‘Big Bad Wolf’ is the one that has received most attention. This is due to the fact that, according to experts, this title is at the root of the success that Quickspin can count on. Not only is the theme of this slot machine based on the popular fairy tale of the wolf and the three little pigs, but also the technical construction of this casino game is excellent. It therefore does not offer players the following features:

1. A unique bonus round;
2. Superb animations;
3. A high payout percentage;

This slot machine immediately won the hearts of many people and also succeeded in winning several prizes. This included the EGR Award for Best Slot of the Year 2013. This is a very prestigious title that put Quickspin on the map just one year after its founding. From that moment on, the tone was immediately set and Quickspin also succeeded in achieving major growth. Not long after, it opened new offices in Sweden and Malta. Quickspin’s successful strategy did not go unnoticed. After all, in the year 2016, more specifically in the month of May, the company was acquired by Playtech for a whopping €50 million.

When you take a closer look at Quickspin’s range of titles, you will immediately notice that the vast majority of them are low-variance casino games. This ensures that you can keep playing for a very long time, even if you only have a limited budget. In other words, you get a lot of fun for the money you put in. That said, this also makes it a little more difficult to win big with most Quickspin slots. This is partly due to the fact that you cannot retrigger during a free bonus, for example.

Another interesting advantage when playing Quickspin slots is the often very high payout percentage you can count on as a player. For the majority of these casino games, a payout percentage of some 97 per cent applies in practice. If that is not a bonus! Would you like to take a chance on a slot machine that does have a high(er) variance? In that case, you should look in the direction of titles such as Sakura Fortune and Wild Bandits. These have a variance that is a lot higher. There is a reason why you can count on a maximum payout of up to 1,000 times your bet on these slots. Even if you prefer high(er) variance slots, Quickspin is still the right place to be!